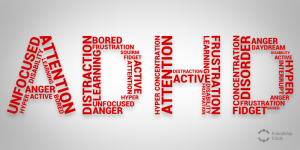 Attention Deficit and Hyperactivity disorder is a well-known and well researched disorder that some children and adults face. It is a common developmental problem which results in poor concentration and/or poor control of impulses. It can affect children’s education, social skills and family functioning. If not diagnosed and treated, the child may face additional problems in future including academic difficulties, relationship issues, substance abuse and mental health disorders in adulthood.

Hyperactivity and impulsivity are easier to identify than inattention. This concentration difficulty can perhaps be more disabling than other features as it can often go undetected. It is not that these children can’t concentrate, it is just that they find it harder than their peers. They may be able to concentrate on things that interest them or when the classroom is very quiet. Children with ADHD find it difficult to filter out the most important thing to focus on e.g. the teacher’s instructions have equal value to the conversation that is going on behind the child and therefore their attention shifts between them.

The primary characteristic of attention deficit hyperactivity disorder (ADHD) is a persistent pattern of inattention and/or hyperactivity-impulsivity that interferes with functioning or a child’s development.

The problems usually occur in two or more areas of a person’s life: home, work, school, and social relationships. ADHD is also referred to as attention deficit disorder (ADD) when hyperactivity and/or impulsivity are not present.

Attention deficit disorder begins in childhood. The symptoms of inattention and hyperactivity need to show themselves in a manner and degree which is inconsistent with the child’s current developmental level. That is, the child’s behaviour is significantly more inattentive or hyperactive than that of his or her peers of a similar age.

Several symptoms must be present before age 12 (which is why ADHD is classified as a neurodevelopmental disorder, even if not diagnosed until adulthood). In the Diagnostic and Statistical Manual of Mental Disorders, Fourth Edition (DSM-IV), symptoms were required before age 7. Now the age of 12 is seen as an acceptable criterion because it is often difficult for adults to look retrospectively and establish a precise age of onset for a child. Indeed, adult recall of childhood symptoms tends to be unreliable. Thus, the DSM-5 has added some leeway to the age cut-off.

A: A persistent pattern of inattention and/or hyperactivity-impulsivity that interferes with functioning or development, as characterised by (1) and/or (2):

B: Several inattentive or hyperactive-impulsive symptoms are present prior to the age of 12.

C: Several inattentive or hyperactive-impulsive symptoms are present in two or more settings (e.g. home, school, work, with friends or relatives, other activities).

D: There is clear evidence that the symptoms interfere with, or reduce the quality of, social, academic, or occupational functioning.

E: The symptoms do not occur exclusively during the course of schizophrenia or another psychotic disorder and are not better explained by another mental disorder (e.g. mood disorder, anxiety disorder, dissociative disorder, personality disorder, substance intoxication or withdrawal).

The Different Types of ADHD: